The Poetry of Boxing

Posted on September 13, 2011 by maryloudriedger

Dave and I have gone by the Pan Am Boxing Club several times on our walks in our neighborhood.  The club which was founded just after Manitoba hosted the Pan Am Games in 1967 is a real community player. They are in the process of developing the building next door as living quarters for at risk youth in downtown Winnipeg who want to make a change in their lives. The young people who participate will be involved in a program that includes fitness, education and volunteerism.

The Pan Am Boxing Club is located in this beautiful old building on McDermot Avenue. I did a little research and found out it was built in 1893 and the top two floors were added a few years later. It was designed by Hugh McCowan and was home to the Stovel Printing and Publishing Company.  A German newspaper called Der Nordwestern also had its editorial offices in the building. It is an official historic site of Manitoba. In the 1940’s a dry goods firm bought the building.

What I hadn’t noticed till I walked by the building on Saturday night was that the one side of it features the verses of a poem, a poem about boxing. The verses of the poem are tucked into window frames on the first two stories.

The poem comes from a book called VS.  Kerry Ryan the poet  is described as a shy, bookish woman who decided to take up boxing for the physical and mental challenge and became enamored with the sport as well as with the people at the PanAm Boxing Club.  She wrote a book of poems about her boxing experiences which is available at McNally Robinson here in Winnipeg. 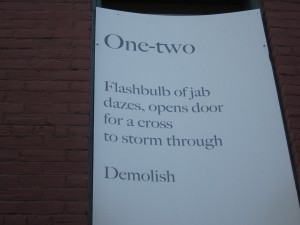 END NOTE :  Kerry Ryan the poet saw this blog post and sent me a free copy of her poetry book.

One thought on “The Poetry of Boxing”