James Bond is From Winnipeg

Posted on October 30, 2011 by maryloudriedger

Ian Fleming the author of the James Bond novels once said,”James Bond is a highly romanticized version of a true spy. The real thing is … William Stephenson.” Walking down Memorial Boulevard this week I photographed this statue of William Stephenson and when I got home I did a little research. I was surprised to find that Stephenson was a Winnipeg native, born right here in the Point Douglas area where I live. He taught math and science at the University of Manitoba and before he died  he bequeathed $100,000 to the University of Winnipeg to fund scholarships for outstanding students. Winnipeg has an official fan club for Stephenson called The Intrepid Society. As part of their agenda they’ve successfully lobbied to have a street in Winnipeg named after their hero and a statue of him installed in CIA headquarters in Washington. DC. A public library in Winnipeg also bears his name.

As this plaque on his sculpture indicates, William’s code name was Intrepid when he worked for British intelligence in New York during World War II. A book about his life titled A Man Called Intrepid was a best seller and later was turned into  a TV mini-series starring David Niven and Barbara Hershey.

Orphaned as a young child and then adopted, William was fascinated with Morse code as a teenager and was good at boxing.  He served as a pilot during World War I and was shot down and captured by the Germans. He managed to escape after three months and won several medals for bravery. Stephenson went on to study at Oxford University.

William accomplished many significant and impressive things in the next couple decades. After teaching at the University of Manitoba he moved to Britain where he invented the process for sending photographs over the wire electronically, purchased a radio manufacturing company that made him a millionaire before he was thirty, and then diversified into film, coal and oil refining, the steel industry, television and aircraft production. He helped to found the British Broadcasting Corporation. (BBC)

He obviously wasn’t looking for a job when Winston Churchill asked him to become the head of British security in New York coordinating counter-espionage efforts together with the Americans. He hired hundreds of people to work for him, many of them Canadians and he paid for their salaries out of his own pocket. He set up a school in Whitby Ontario that trained more than 2000 covert operators including Ian Fleming, the author of the James Bond books. 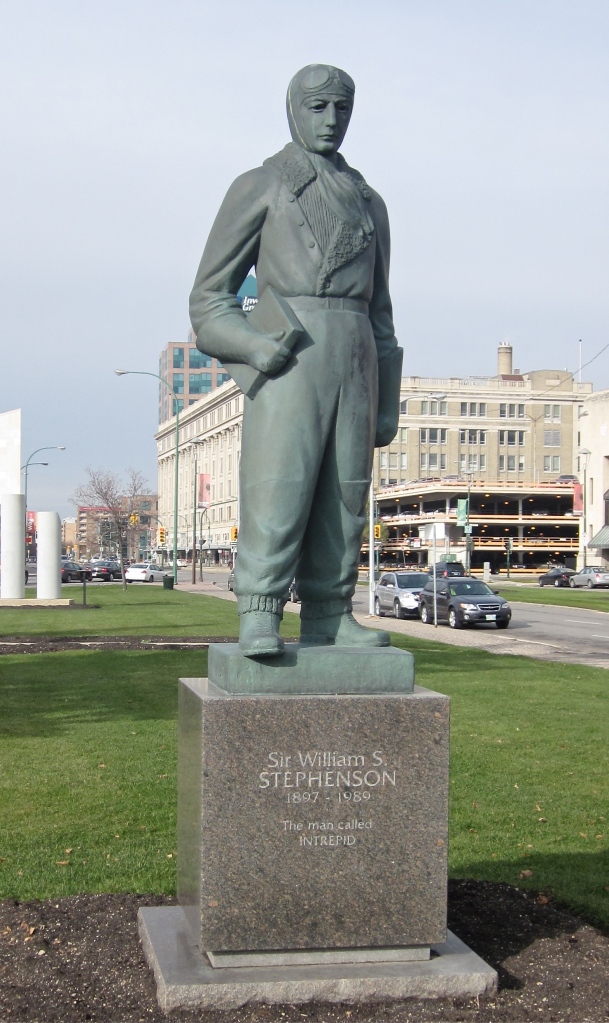 The sculpture of William Stephenson on Memorial Boulevard, was created by renowned Winnipeg sculptor Leo Mol and was unveiled by Princess Anne in 1999.

I found a clip from the film version of The Man Called Intrepid on You Tube. I’d like to get a copy of the entire thing and watch it. I had no idea the inspiration for Ian Fleming’s James Bond came from Winnipeg.

3 thoughts on “James Bond is From Winnipeg”