Posted on November 16, 2011 by maryloudriedger

Today Dave and I stopped by Gunn’s Bakery on Selkirk Avenue to get some pumpernickel bread and crusty rolls for our lunch. Gunn’s is a Winnipeg landmark founded in 1937 by Florence and Morris Gunn, the couple featured in this mural on the building beside Gunn’s Bakery. Morris,whose father was a baker, immigrated to Canada from Poland in 1926 and worked hard in a Winnipeg bakery to save enough money so in 1930 he could bring his fiancée Florence to Canada and they could get married.  The couple had three children and eventually gathered enough resources to open their own bakery at 247 Selkirk Avenue . At first they lived in the back of the bakery, but as their business and their family grew they had to buy a separate home.

Gunn’s Bakery is still at 247 Selkirk and now it is run by Morris and Florence’s sons Arthur and Bernie. Arthur who has his Masters Bakers Certificate is in charge of the producing all the baked goods, including the 25 kinds of bagels Gunn’s is famous for. Bernie, who is an accountant and business administrator takes care of the finances. Morris passed on everything he knew about baking to Arthur before he died in 1973. Florence lived till 1998, long enough to see her family’s business expand to a 24 hour a day operation that employs some 80 people.

Nothing at Gunn’s is mass-produced and many of the products are still being made with Florence and Morris’ original recipes. Devout Jews, Florence and Morris wanted to have a kosher bakery and sought rabbinical supervision to insure that was the case. Morris and Arthur have maintained that tradition. Although they have introduced many new products they continue to make the European breads and pastries that were familiar to their parents’ neighbours in the North End of Winnipeg in the 1930’s and 1940’s. 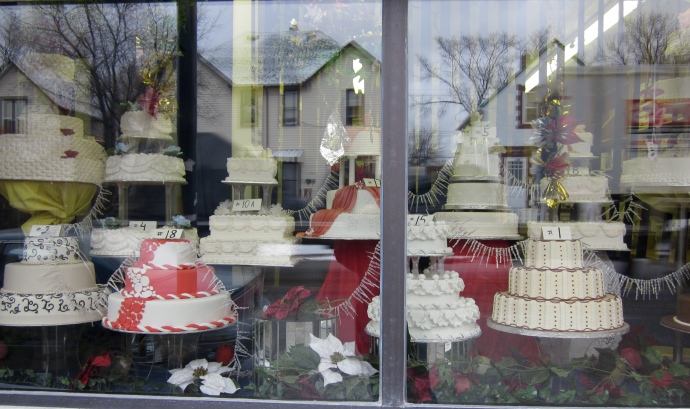 Gunn’s is famous for its wedding cakes and in a radio interview Arthur said people come in to the bakery to order wedding cakes for their children and tell him their own wedding cakes were made by Arthur’s father Morris.

It wasn’t easy to walk out of Gunn’s with only our bread and rolls. We spent a fair bit of time eyeing all the luscious looking pastries but managed to have enough self -control to leave without buying any. “Are you sure you wouldn’t like anything else?” the friendly clerk asked as Dave pointed to various desserts.  “We’ll be back,” he said as I led him out of the store. I’m sure we will.