The Street Where I Live

Posted on February 27, 2012 by maryloudriedger 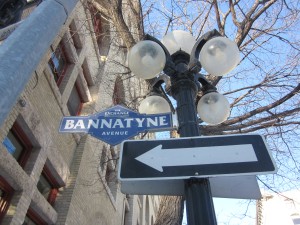 Seven months ago I moved into a condo on Bannatyne Avenue in Winnipeg. Today while I was reading an essay by Ed Rea about Winnipeg called Prairie Metropolis: A Personal View I came across the name A.G.Bannatyne. 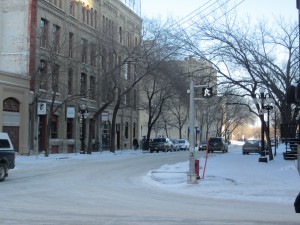 But could Bannatyne Avenue also be named after someone who had been important to the history of Winnipeg?

Meet A.G.  Bannatyne aka Andrew Graham Bannatyne who was born in the Orkney Islands in 1829 and began working for the Hudson’s Bay Company in Norway House in 1846.

In 1850 Andrew fell in love with this young woman named Annie McDermot, one of 15 children of Andrew McDermot and Sarah McNab.  Annie was highly educated. Her Dad was a wealthy Red River merchant. Unfortunately the Hudson’s Bay Company did not look kindly on its junior clerks getting married so in order to wed the fair Annie, Andrew had to quit his job.

Andrew decided to start a merchant firm in Red River with a partner and soon it was a large and flourishing business. The Hudson’s Bay Company must have been a little upset with Andrew for leaving them since they accused him of illegal trading in 1847. Apparently he weathered that storm nicely because he was appointed a Red River magistrate in 1861.

In 1868 when Louis Riel led a rebellion against the government of Canada and set up his own provisional government in Manitoba, Andrew Bannatyne  tried to serve as a mediator between the two warring factions.  This didn’t necessarily make him very popular.

However despite this he was appointed the first postmaster of Winnipeg in 1871 and helped to found the first Free Masons lodge in the province of Manitoba.

By now he and Annie had three children. Annie had given birth ten times but seven children had died. Annie was not only devoted to her family but gave lots of her time to various Winnipeg charities, in particular the Winnipeg General Hospital which the two Andrews in her life–her father and husband,  had helped to found at her request and with her encouragement. Annie is known as one of Winnipeg’s first philanthropists. Annie,  a Metis, was outspoken and opinionated.  She was incensed when a Winnipeg writer named Charles Mair wrote an article for the Toronto Globe in which he made derogatory comments about the women of mixed blood in the Red River Settlement.

Annie knew that Mair came into her husband’s store every Saturday to collect his mail and she told the store clerk that as soon as Mair arrived she wanted to know. The clerk dutifully informed Annie of Mair’s arrival and she burst into the store brandishing a horse whip. Grabbing Mair by the nose she gave him a half-dozen licks with the whip and shouted, “That’s how the women of Red River treat those who insult them.” Mair to his credit did not retaliate and left the store in humiliation. Luckily a priest named George Dugas was in the store at the time and wrote about the debacle he had witnessed in his journal. Later Louis Riel would write a humourous poem about the encounter between Mr. Mair and Mrs. Bannatyne. 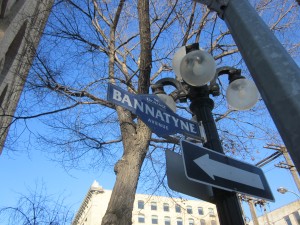 During the 1870’s Andrew Bannatyne did several noteworthy things that might have merited naming a street after him. He helped found the Winnipeg Board of Trade and the Manitoba Historical Society. He was elected to the House of Commons in 1875 and……….he played in Winnipeg’s first ever curling match in December of 1876.

Unfortunately Andrew Bannatyne’s business did not fair well in the 1880’s and he lost all his wealth and land. He retired from politics in 1878 and died in 1889.

They say that Bannatyne Avenue was named after Andrew Bannatyne but I’d like to think it was named after his wife Annie too. Her feisty compassionate personality makes her every bit as colorful a historical figure as her husband.

Posted on February 24, 2012 by maryloudriedger 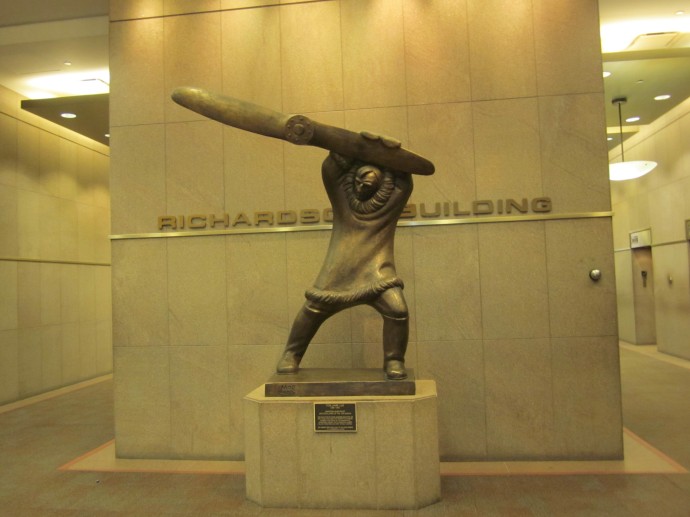 Every morning on my way to the gym to do my work out I pass by this statue of Tom Lamb on the main floor at the Lombard Place entrance of the Richardson Building. Many people rest their belongings on the statue’s base now in winter to give themselves free hands to secure their scarves and hats before stepping out into the snowy cold air. I’ve done it myself. 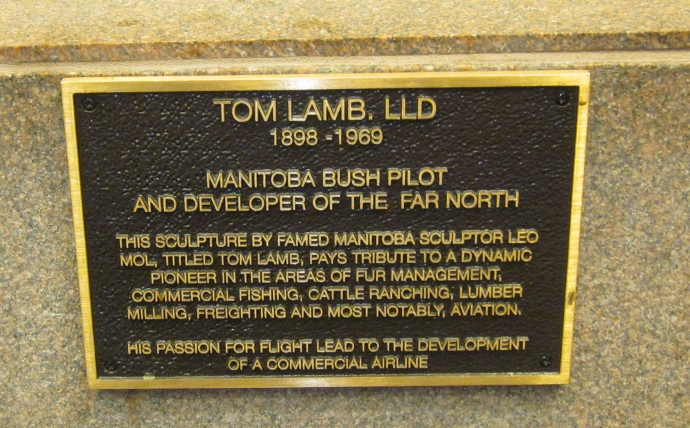 Today I took time to read the plaque on the statue that told me who the pilot in the statue was, and why he merited a bronze likeness by the famed Canadian sculptor Leo Mol.   I was curious to learn more about Tom Lamb.  I found out he’d been born in 1898 in Grand Rapids Manitoba. His British father and mother were Anglican missionaries in the north. His Dad did many different jobs but was primarily a school teacher. He  moved his family to Moose Lake in 1900.

Although Tom would later be awarded an honorary doctorate degree from the University of Manitoba his formal education ended at grade three. In 1935 he  bought an airplane and learned to fly it so he could go fly fishing in the north. Four years later he had founded Lambair.

The airline hauled fish and furs, trappers and fishermen. They transported Inuit families and equipment for oil rigs. They handled emergency and medical evacuations. The motto of the airline was “Don’t ask us where we fly! Tell us where you want to go.”

Tom, also known as the “Babe Ruth of bush pilots” married Jennie and they had eight children.  The Lamb kids all started flying by sitting behind the steering wheel of a plane on their Dad’s lap in the cockpit.

Their six sons all became career pilots as well and went into business with their Dad. By 1959 Lambair had logged more than 1,500,000 air miles, owned twenty planes and employed 40 pilots. In 1960 Tom, who by now had earned the nickname “Mr. North” let his sons take over most of the airline business since he still had his fur trading operation to run, a 7,240 acre cattle ranch to maintain and 24 grandchildren to keep him busy.

Tom Lamb died in 1969 and his sons kept running the business till 1981. A 1981 Free Press article notes that Lambair is bankrupt and Calm Air is trying to buy the company. Only one of Tom’s  grandchildren, a granddaughter Tracy took up flying. Tom’s son Jack has told the family’s story in his book My Life in the North. 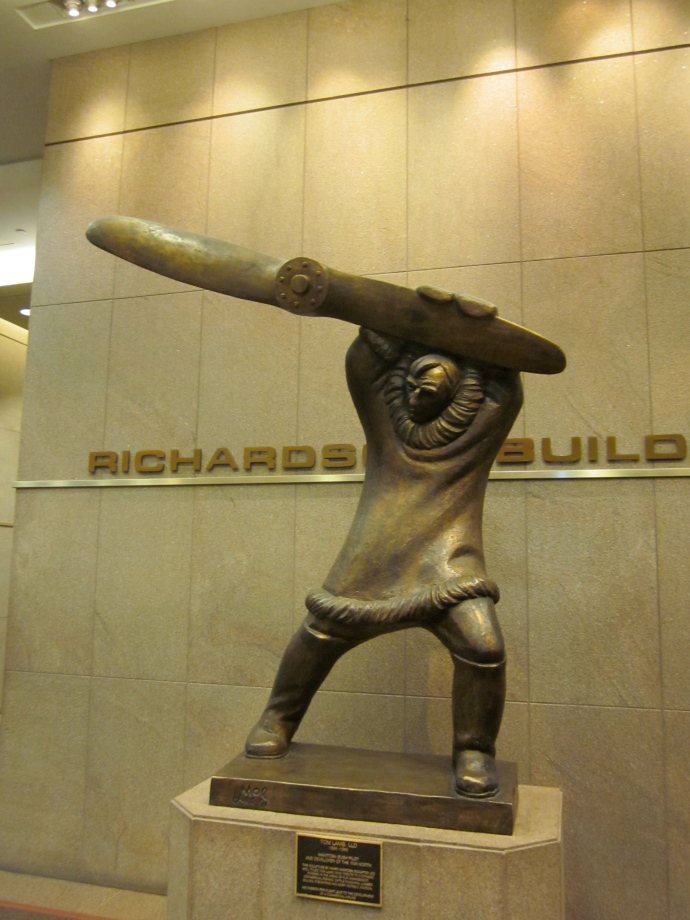 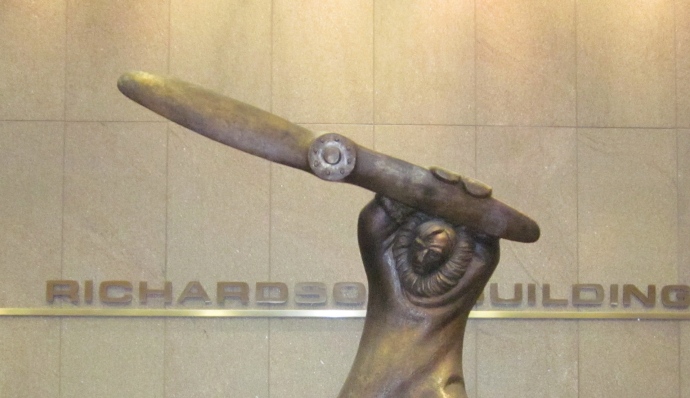 Leo Mol said he wanted to show Tom Lamb as a young pilot and he made the propeller in his hands look a bit like a clock because he wanted the statue to take people back in time to the era when Mr. Lamb helped open up the north as an aviation pioneer. 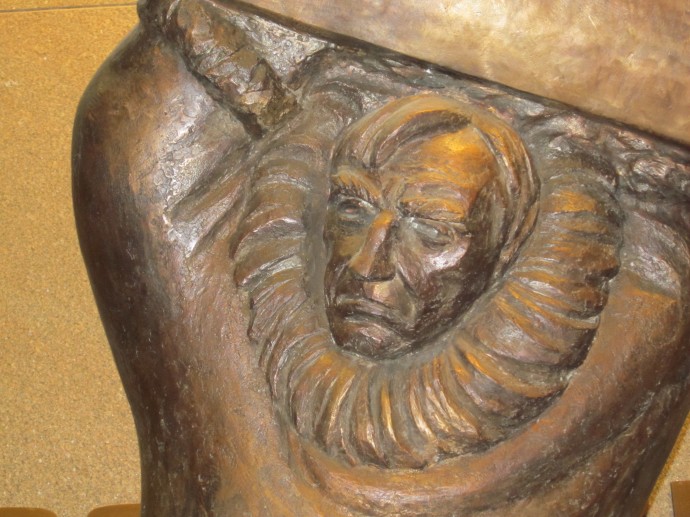 In September of 1977 at a ceremony where Tom Lamb was posthumously admitted to the Honor Roll of the Aviation Council he was lauded as an individualist, humanitarian, multi-skilled, community minded businessman.